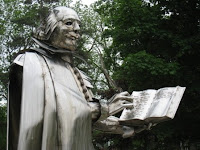 Stratford, Ontario, is my own personal miracle: a town full of people who not only appreciate Shakespeare but even depend on him for their way of life. On top of that, it's a haven for world-class independent restaurants and the epicenter of Canada's slow-food movement.

And, there are so many educational opportunities here: lectures on the plays, discussion groups, theater tours, acting classes and more. (Yesterday, I overheard a woman discussing her recent stage-fighting class. Now that sounds like fun!)

So, as promised, here's a quick photo tour of the city. First, here are the two largest of the four theaters. The Festival theater, at left, overlooks the River Avon (yes, really). The Avon theater is downtown. 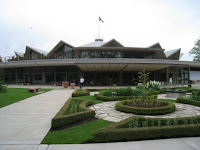 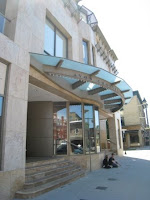 Here are a few of the independent restaurants downtown. Both Tango and Bentley's have inns upstairs (which are both wonderful). Balzac's is the town's independent answer to Starbucks. 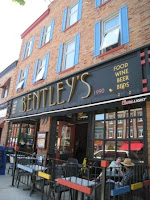 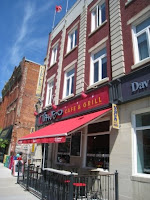 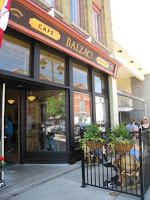 The city also has lots of green spaces, including a Shakespeare garden. On Saturdays, you can stop by Art in the Park (a mini Penrod) or head over to the year-round farmers' market, which is fully stocked with meats, cheeses, veggies, herbs and baked goods. Build your own picnic and head down to the water: 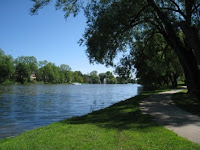 Intrigued? The festival runs each year from April to early November, so there's still time for a trip this year. Visit the festival Web site for more information, and shoot me an e-mail for tips about inns, restaurants and timing.
Posted by Ashley at 12:14 PM