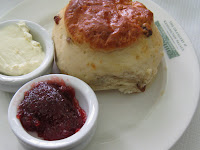 Alternate title: How not to behave in an adult continuing education class.

So, I'm just back from another cooking class at Frasier's Gourmet, this one focusing on the British tradition of high tea. Erin Kem, the sous chef at R Bistro, prepared finger sandwiches, cute little tarts, scones and several kinds of tea -- all authentic and delicious. The topic was inspired by Kem's recent trip to England, and I was looking forward to hearing the details of her trip.
The problem: The sold-out crowd included a mom's-night-out group of 10 women, who treated the event as their own private gathering. They gabbed about upcoming plans, their children, their husbands, their political views and their neighbors, drowning out everything Kem had to say. They were oblivious to Kem's attempts to talk louder and other students' requests for Kem to repeat things because they couldn't hear.
Even more frustrating, members of the group occasionally decided to pay attention, asking Kem questions about things she had already explained. That's just rude.
Don't get me wrong: I think taking a class together is a fabulous activity for a girls' night out, especially when it includes scones and cute little tarts.
But here's a new rule to add to my previous list: If you come to a class as a group, be respectful of the teacher and the other students. If you want to chat, get a martini afterward. At the class itself, no side conversations allowed. It's a rule most of us learned back in kindergarten.
Posted by Ashley at 11:53 PM